Come to the RAYHA Board Meeting 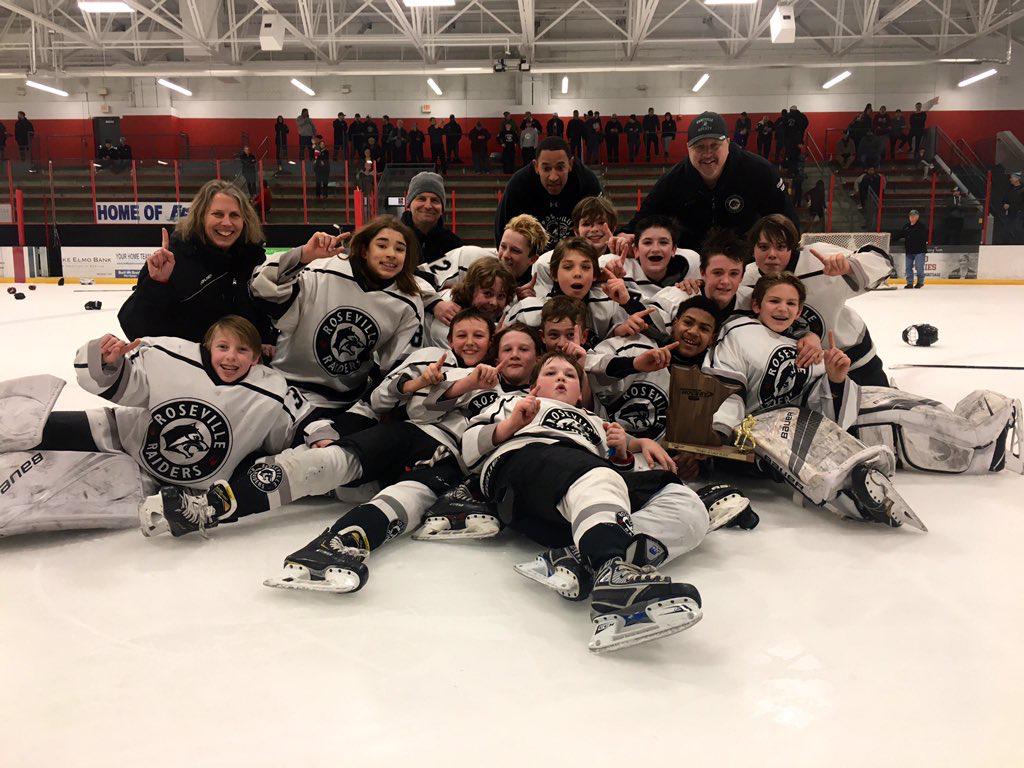 WE ARE RAIDER PROUD OF PWA!

Unfortunately, the decision has been made to cancel the state tournaments. Certainly not how we wanted the season to end but congratulations to our Peewee A team on an exceptional year. The boys deserved a chance to play for a state championship and we feel for them, but the safety of our players and families is more important than anything. Congrats Peewee A, we look forward to what’s in store next season! 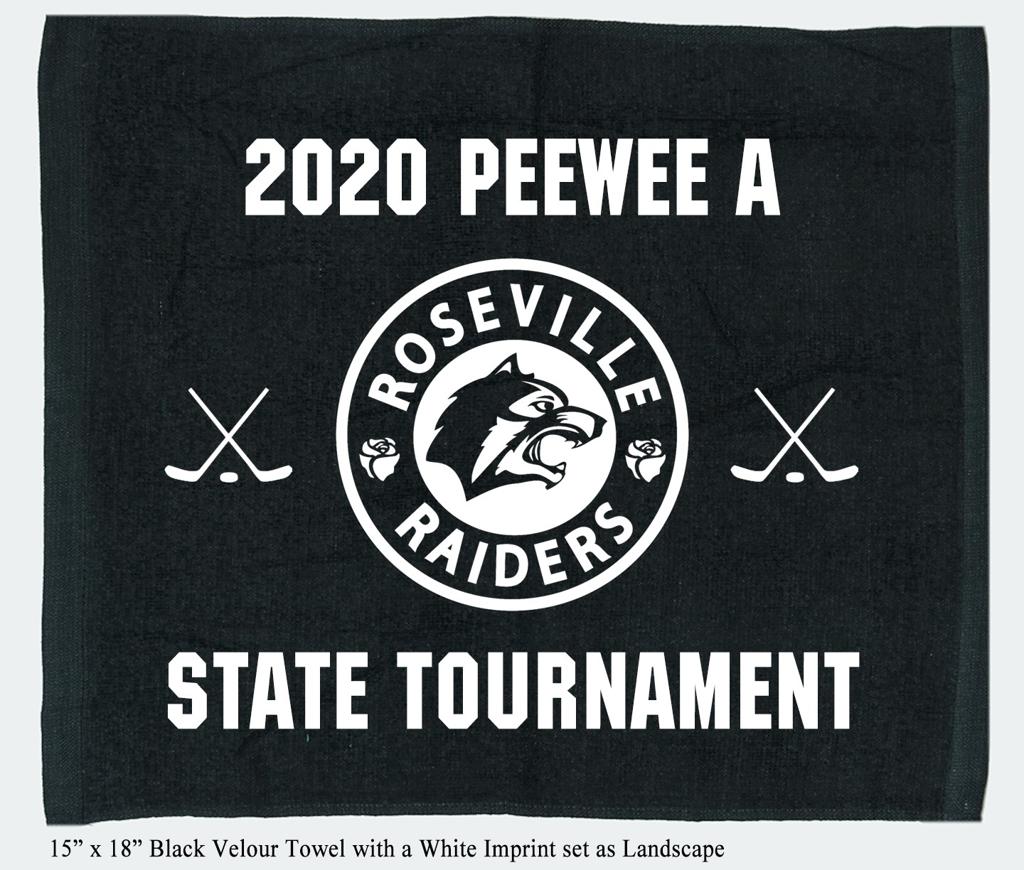 Congratulations to the Roseville Raiders Squirt B2 team for winning the 2020 Squirt International Hockey Tournament held February 13-16 in Fargo.

The boys were the only team to finish an undefeated 6-0 in the tournament while outscoring their opponents 36-10.

The champions started off Friday by beating Sartell and Fort Garry North, 9-1 and 9-0, respectively.

Then they played two very disciplined games Saturday by defeating Walker and East Grand Forks-Black, 7-2 and 4-2. (The EGF team had previously been undefeated and were ranked 2nd by the MN Youth Hockey Hub at the B1 level.)

Sunday consisted of two games coming down to the final seconds. The Raiders fell behind 2-0 to a very skilled team from Langdon, ND (who had beaten the Bagley Flyers the day before who had themselves been ranked #4 in the MN B1 hockey poll). As the Raiders have all season, they came back and scored three unanswered goals through excellent passing, shooting, and skating. The Langdon team pulled their goalie and were on a 6 on 4 power play for the final minute of play, but the Raiders stood tall.

The championship game at the main Scheels Arena was against the Ames, Iowa Flyers. It saw the Raiders again fall to an early 3-0 deficit. But with great coaching adjustments and banding together like all good comrades do, the Raiders came roaring back to tie the game 3-3 early in the 3rd period.

The Raiders goalie withstood a barrage of great scoring chances from the Ames team, but through two overtime periods, the score was still tied 3-3.

In the best-of-five shootout round, the Raiders once again rose to the occasion by netting 3 goals on 4 chances while the Ames team lit the lamp just 2 times in 5 chances.

The title game was videotaped by a professional film crew and remains available for internet streaming. It was the highest finish for any Roseville Raider Squirt team at the Fargo Squirtacular in recent history.

The victory gives the Squirt B2 team a season record of 30-4 as they enter District 2 play as the #1 seed. As the District 2 tournament will be hosted by Roseville from February 27-March 1, come on out to watch some exciting hockey.

RAYHA wishes good luck to all teams entering the District 2 and other tournaments! 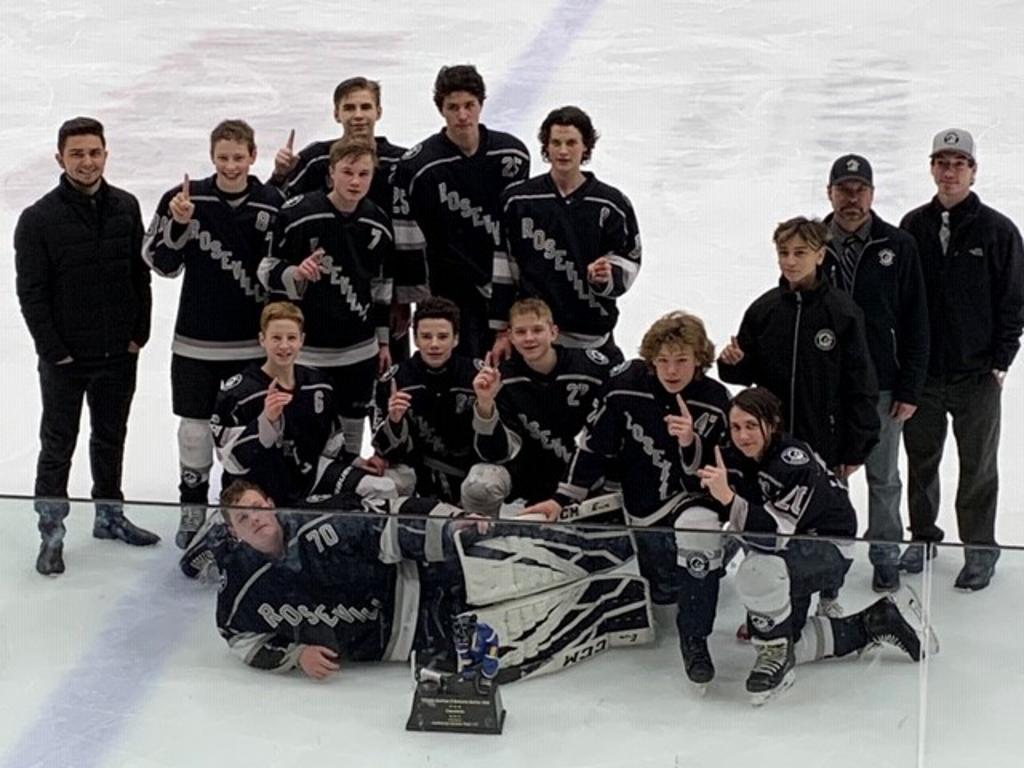 Congratulations to the Roseville Raider B1 Bantam Team on winning the Thief River Fall B Bantam Blue Line Battle!

Roseville avenged an opening round pool play loss to Becker (3-2), only to meet them again in the Championship Game. Raiders won 6-2. The team fought through illness and injury over the weekend. Very proud of this team! 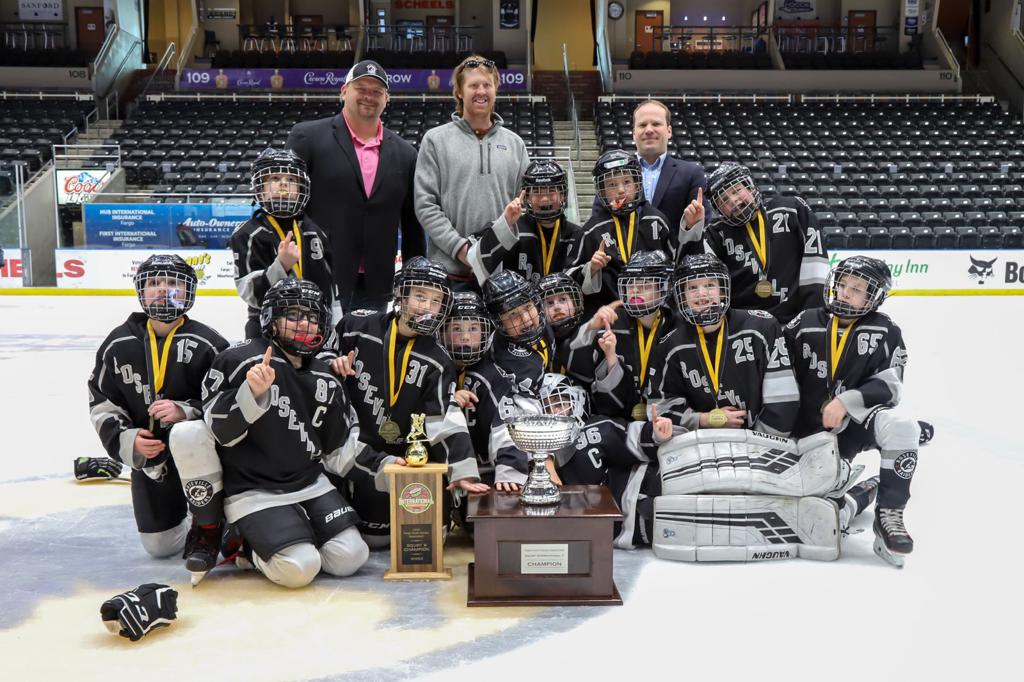 This was the question that was asked when the Roseville-St Paul 12UB1 team lost their stellar starting goalie, Millie Farrington, at the end of the second period to an injury.

Without hesitation, Julia Crump, a 1st year defenseman who had already scored a goal in the first period, said “Put me in coach!” As she was putting on the pads, which weren’t even hers and she had never worn before, the girls were gathered on the bench, psyching themselves up for a grind of a third period with the game tied 3-3, and a goalie that hasn’t seen a shot since the Mite level!

This was not just any game, it was the semi-final of the “Cabin Fever” tournament in Maple Grove, which featured 6 of the top 15 teams in the state. The girls were facing the feisty, and previously #2 ranked team in the State, Osseo Maple Grove, who the Roseville-St. Paul girls had lost to twice and tied once earlier in the season.

A victory would be difficult as they also lost one of their top goal scorers, Ella Berthiaume, to an injury early in the third.

Julia put the team on her back making numerous saves, including stopping a breakaway to start the third period…she was as cool as the other side of the pillow!

As the game clock ticked down and overtime looming, the girls from Roseville-St. Paul found a way to take the lead 4-3 with a greasy goal scored by first year forward Emma Kennifick, with assists by Ellie Boyd and Annie Leclair.

With the OMG Goalie pulled, and the girls down 2 players due to penalties, Julia stood “tall” once again, stymying the opposition with huge save after huge save to seal the victory, and Roseville-St. Paul earned a spot in the Championship game vs Edina.

Coaches and Parents agreed, it was one of the best games they’ve ever been a apart of. This team showed the resilience and maturity that is not often seen at any level. Way to pull together as a team girls, and good luck the rest of the season! 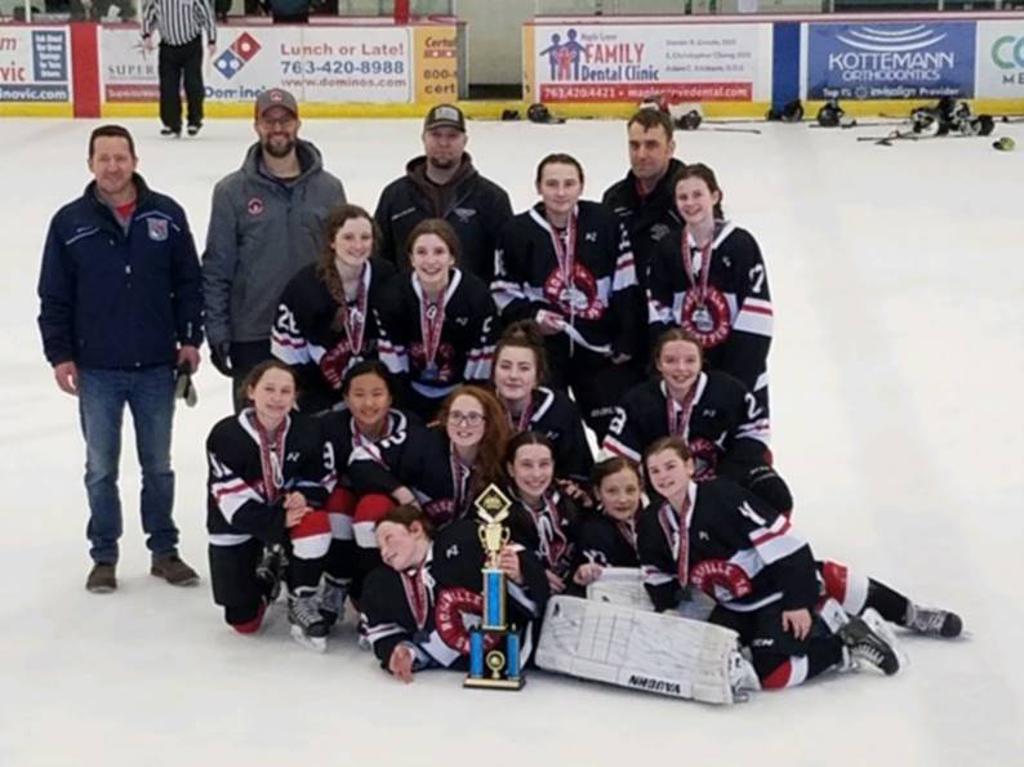 RAYHA Board Meetings are held monthly at the Roseville Skating Center or another designated location. Meetings are held on the third Monday of the month (unless noted below). The meetings are open to all members. The Board reserves the right to caucus and limit the amount of time for discussion of any issue. All RAYHA members are encouraged to attend these meetings to maintain communication between themselves and the Board and to provide input and ideas for the benefit of RAYHA.

RAYHA maintains a license to, and operates a lawful gambling operation, the proceeds of which help keep our programs affordable for all our members. At the monthly board meetings all general members are invited to vote on all matters related to the conduct of gambling operations and give prior authorization for all expenditures of gross profits from said operations. Financial statements and tax documents are available at board meetings or upon request by any general member for inspection and review.

The following is the schedule for the 2018-2019 season, subject to change. All changes will be posted on the website.

All monthly Board Meetings are on Mondays at 6:00 p.m. in the Raider Room at the Roseville Skating Center unless noted below:

* denotes those with a vote

Congratulations to the Roseville-St Paul 12U B1 girls, who had a great showing and took home first place at the Spirit of the North Tournament in Grand Rapids, MN. The girls won all five games they played, including some tough competition from across the region. Their opponents were Cloquet-Esko-Carlton, Rosemount, St Cloud, Mahtomedi, and Moundsview-Irondale.

This is a special team, with a balanced roster where every girl contributes something essential and the girls really play as a team. The girls passed the puck well to move the puck through the neutral zone and set up scoring opportunities. They also provided a strong team defense to support goalie Mille Farrington, who posted an outstanding three shutouts in the five tournament games. With nine of 14 players on this team in their first year of 12U eligibility, this team has a strong future. Well done girls! 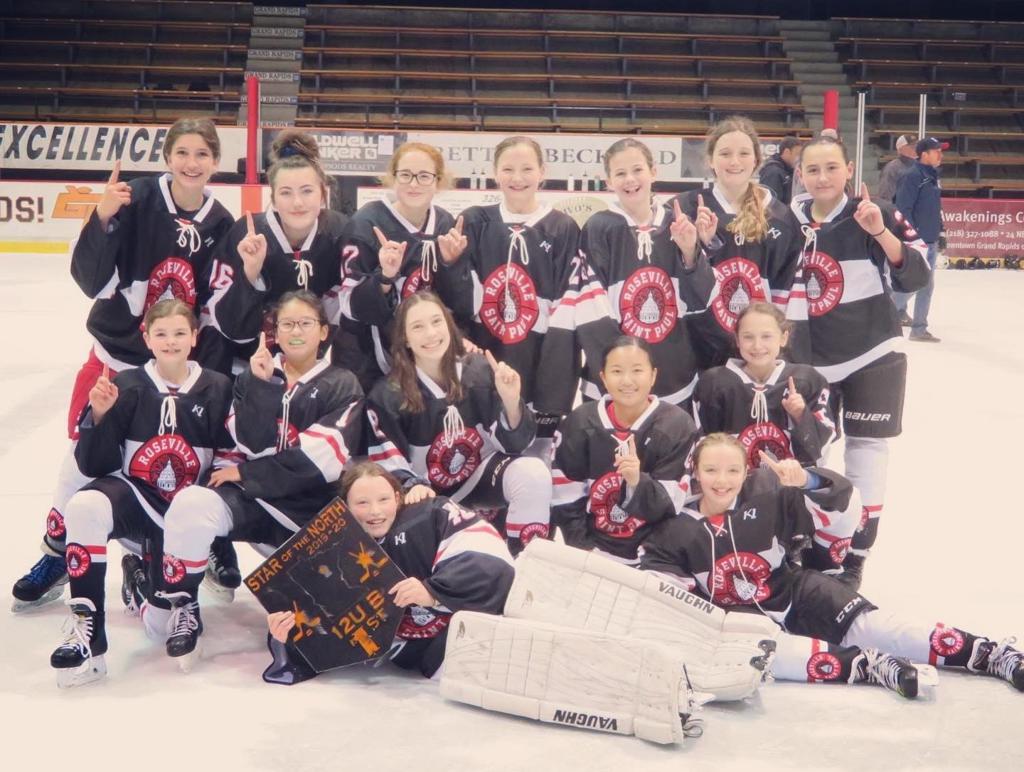 Roseville high school boys hockey coaches and players have started a AAA program specifically designed for Roseville players born in years 2006 - 2009. Not only will you complete as a Raider in 2 local tournaments, you will receive professional training from Coach Scott Steffen and Coach Luke Christianson with 12 hours of on ice instruction and 12 hours of off ice instruction. Sign up for the 2020 off season today as spots are limited!

Please click the correct link to register your player below.

The purpose of Roseville Area Youth Hockey Association is to provide programs to teach, promote and compete in amateur youth ice hockey in a fun, healthy and educational environment for all participants. Roseville Area Youth Hockey Association strives to develop individual and team skills, teamwork, knowledge of the game, loyalty, responsibility and sportsmanship a positive youth sports culture, which teaches life lessons.